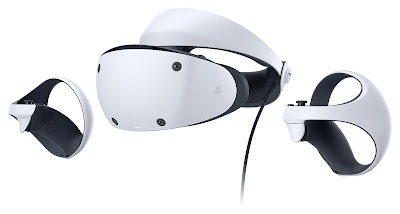 But as reported in The Verge the price is $549, so together with the PS5 that's around $1000 for a tethered headset that can only be played with Playstation content. And, since it's tethered, only in whatever room you happen to have the PS5 placed.

Not long ago, they also announced they only sold 20M PS5 units (although The Verge reports they Sony updated that number to 25M) and their production target for the PSVR2 would be 2M units. That's a sad number, almost as sad as Pico 4 selling less than 50K units in a month in the world's largest consumer market, China. While I get the logic behind the 2M units, it's basically double the attachment rate of 5% that PSVR had to the PS4; the overall numbers prove to me one thing: the era of console gaming is coming to close, the era of VR gaming has begun.

Quest 2 has already sold more units than either the Xbox (both S and X combined) or PS5. If there were holdouts for the PSVR2, the Quest 2 sales may jump even further come March 2023 unless Sony can demonstrate the content really is good enough to justify having PSVR2 rather than getting a headset with a ton of fun games and more being added every month.

I get it, everyone hates Mark Zuckerberg and Meta is a stupid name (not my opinion, but that's how a lot of people seem to feel about it). But the bottom line is, Quest 2 is THE NEXT THING in gaming and both Sony and Microsoft's offerings are stale.