Is the Mobile Payment Tipping-point Approaching in the US?

If recent surveys regarding mobile wallet use are accurate, the mobile payment boom is about to happen. The next two years could see a rapid adoption of mobile wallets among credit card holders, causing a paradigm shift in the way we make purchases offline and online. 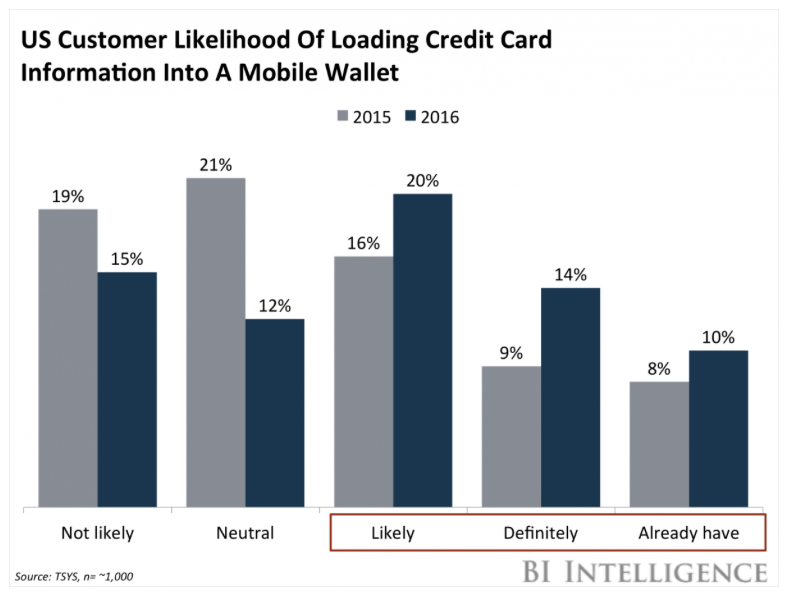 If this data holds true, it’s likely we are on the precipice (FINALLY!) for a mobile payments boom in the United States.

Scenarios for a Mobile Payment Boom

My first impression from this chart by BI Intelligence was that there is a wave of mobile payment adoption coming among credit card holders. However, we need to make some assumptions to see how rapidly this wave is approaching. First, let’s try to get a grasp on the situation. 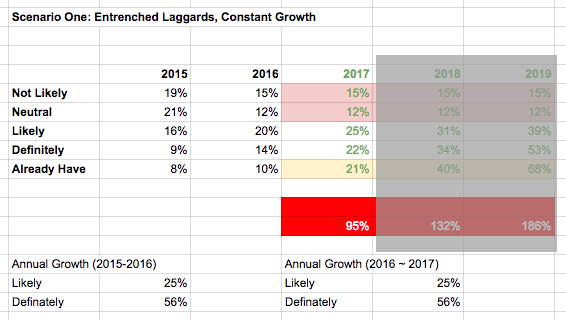 In this What-if scenario, we can clearly see that the number of people planning to store credit card information in 2017 will likely increase at a faster rate than previous years. At a constant rate of YoY growth in positive intent only 95% of the population is represented. It is also likely the laggards will continue to decrease over time though we have kept them constant in this scenario.

Furthermore, if we reduce the number of people with positive intent who actually load their credit card -- conversion -- from one in three (33%), the growth rate for people who are “Likely” or “Definitely” going to use a mobile wallet must increase even more dramatically.

Let’s modify our key assumptions to create a scenario where we have a moderate conversion from intent to action and growth in positive intent, but a similar distribution of responses over time.

However, let’s also assume there is a floor for laggards who show negative intent.

In this scenario we get a picture that’s more believable. We see a spike in positive intent next year, and have adjusted the growth of positive intent moving forward so we get a similar distribution among “Likely” and “Definitely” reponses. At the same time, assuming a moderate conversion rate (one in five, and one in three respondents respectively) among people with positive intent, we see a nice growth curve among those who “Already Have” stored their credit card information into a mobile wallet. 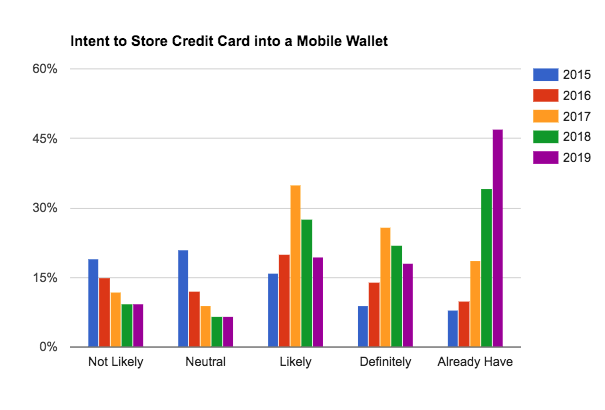 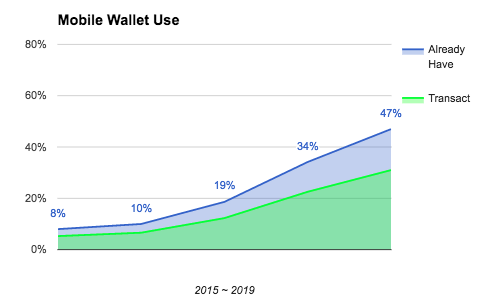 Does this seem like an aggressive forecast? Not really. If this is correct, it puts consumers transacting with a credit card via a mobile wallet around 30% in 2019.

In other words, half way through the Early Majority stage on the Diffusion of Innovation scale.

Does this mean my Mobile Wallet is about to be really successful?

It’s unclear what success means, but certainly it means a paradigm shift in the way people transact in less than five years. There are many companies banking on this shift, hence the options for consumers are growing as the market is becoming more fragmented.

Currently, most players measure success by number of registered cards, number of transactions, and the value of those transactions. However, profitability for mobile wallets is something still in the future, though certainly that future is less distant today.

How long can you stick in the fight?

Are you focusing on a superb mobile experience?

Of course, your payment service is worthless without acceptance. It is essential to have great retail partners who are part of the daily lives of your target audience. And while acceptance is key, so is awareness of your mobile wallet.

Most iPhone 7 users who have a credit card stored on Apple Pay fail to use it because they simply forget it is an option or they don’t know it is. Of course, universal acceptance would resolve this… but until you can get that (please don’t hold your breath) making sure your customers know where your mobile wallet is accepted is critical.

Combining these two critical factors, Acceptance and Awareness, into a superb mobile experience will mean you have a shot at catching onto and riding that wave of mobile wallet adoption.

Can you monetize enough?

The question still remains, how can you monetize your mobile wallet even with a wave of new customers? The recipe for success in consumer-facing mobile payments is still unclear.

There is a plethora of business models and new technologies being experimented with all the time by dozens of players across the payments value chain. Many of these are designed to reduce cost and generate income from that savings, others are designed to create more value by offering discounts or loyalty rewards, while others promise a faster checkout, or try to provide instant settlement.

The list of players is long and diverse. In nearly every country in the world there are several mobile payments players including banks, startups, telcos, retailers, and OEMS. There is a different recipe for each of them.

Ultimately the winners in each market will be those services which can combine Acceptance and Awareness, with a Superb Experience, and a unique Business Model which leverages New Technologies that address cost and speed. I wouldn’t call that a recipe, but perhaps you can call it an outline. 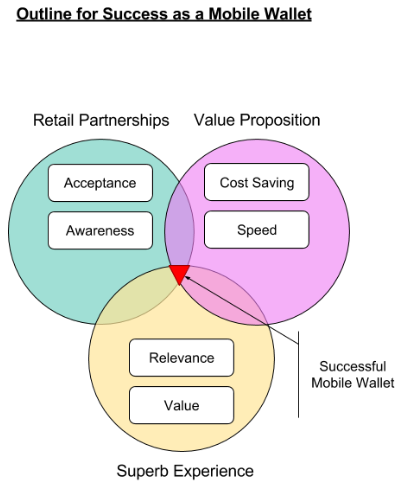 Is RCS Really A Sleeping Giant

RCS vs OTT Messengers from Michael Lesniak
Republished from my LinkedIn profile
RCS promises to be a major upgrade to the Native Messenger on your Android smartphone. But is all the talk about a Sleeping Giant over blown?

RCS, or Rich Communications Services, is a protocol that's been around for several years. It allows carriers to provide services like Voice and Video Calls, File Sharing (think Photos), and of course Chatting 1:1 or as a Group. The problem with RCS for years was that it requires Interoperability between carriers, otherwise end users can only use the messenger among friends on the same network. These contracts take time and create a complicated user experience (Johnny: "Why didn't you get my text?").
Jibe Mobile created a Hub to allow carriers to create one NNI (Network-to-Network-Interface) with their communications service in order to create interoperability with any other carrier also connected to the Hub, provide they used their white-label messenger (Messenger Plus). They offered colourful skins so carriers could "customise" the user interface. Google acquired Jibe last year, and at MWC a few weeks ago they made some announcements. Yippie!
Google's new platform is great, don't get me wrong. However, it is great as an upgrade to the native messenger available on your Android smartphone if it supports RCS (btw only a fraction of all Android devices currently support it, though that will certainly change). The idea that RCS will emerge as a rival to OTT Messengers like WhatsApp, Facebook Messenger, or WeChat (not to mention Instagram, SnapChat, or anything else new that "tweens" are using) is unfounded in reality, or really optimistic.
The bottom-line is people use OTT Messengers (like other social media) because their friends use it, it's personal, it's unique, and often it's private -- or at least more private than your Google-provided messenger. And more than ever, OTT Messengers are evolving to rival not SMS or other Communication tools, but Operating Systems themselves. They are the new layer upon which all m_commerce is being built... or rather integrated with.
If App distribution was broken before, it's dead now. The tops apps are almost always Facebook, Google, or Apple (or some other usual suspect). Services, both private and public, don't have the time or money to compete with those giants for audience. Enter the OTT Messenger with a dedicated audience that's big and local. On-demand services, eCommerce, traditional businesses, public services, payment (p2p, c2b, and even c2g) can all be integrated to the OTT Messenger. And these integrations can be surfaced, or not, based on wherever the user is. WeChat is a great example of this, and they are pushing into Subsaharan Africa something fierce with their major shareholder Naspers. That's significant in several ways, but in terms of the above examples that means millions of people who are already using their phones to pay for everything. A nudge may be all it takes to put WeChat and Naspers at the centre of m_Commerce there similarly to how WeChat has positioned itself in China.
In addition to services, OTT Messengers are ideal for content distribution which drive downloads for other types of apps. This could be anything, literally.
So sleeping giant? Maybe, those guys at Google are obviously creative and smart. We'll see what they come up with. But on the face of things, Google's new Jibe makes for some fancier Native Messengers, but will hardly impact the impressive rise of OTT Messengers to the centre of our smartphone experience.
Checkout some clips from my slideshare below or see the whole thing:
http://www.slideshare.net/malesniak1/rcs-vs-ott-messengers 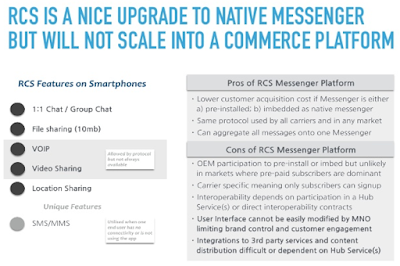 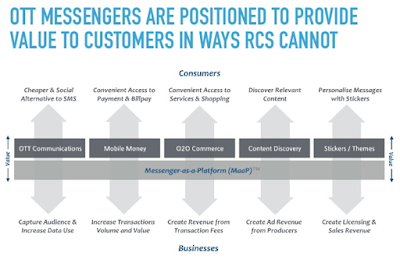 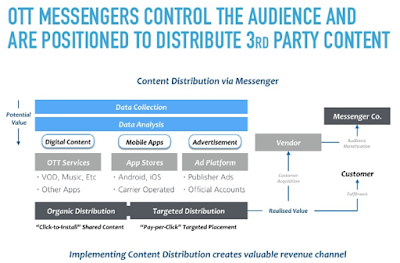