Amazon began as an online bookstore. Books were Jeff Bezos answer to the questions “What obvious thing do you know that no one else knows?” He knew there was a longtail of demand for books, that there were people frustrated because either they couldn’t find the books they wanted at their local bookstores or they couldn’t find them quickly. He knew there was a longtail of supply for books, that there was potentially an infinite number of books to fulfill that demand. And he knew people would flock to his webstore if he could provide a solution to connect demand with supply better than anyone else.

While the Everything Store is supposed to have been founded on the premise that the internet would make it easier for consumers to find “Everything” at a lower price, books were the perfect proxy for “Everything.” Books presented a clear problem for both mainstream and niche consumers which could be solved, presented a nearly endless longtail and an eternal shelf-life.

Today the longtail is growing in influence as the power-dynamics of publishing is shifting away from major publishers and into the hands of authors.

The Endless Longtail of Books

The Association of American Publishers (AAP) is “the largest U.S. trade association for the consumer, educational, professional and scholarly publishing industry.” They have for years been tasked with creating standards for publishing, keeping tabs on the book selling industry, and hosting events that bring the industry together to maintain a community of publishers, authors, and distributors. AAP represents publishers, and reports on their performance based on platform (print, or digital) and category monthly and annually. Last year they reported that eBook sales are in decline, and infact they were for publishers.

But the real story here was not that publishers represented by AAP are reporting a decline eBook sales; rather, how consumers are choosing to buy independently published eBooks. Fortune, in response to a NY Times article publicizing AAP’s sales statistics as a “plot twist” (that eBooks were in decline while print sales were improving), reported that according to independent industry analysts at Author Earnings the market for eBooks is relatively stagnant though long-term trends favor eBooks becoming dominant over time. What’s remarkable is not the struggle between digital and print, but rather that independent publishers… or self-published authors… now sell more eBooks than the Big 5 publishers who have traditionally dominated book sales.
The ascension of “indie publishers” indicates that a) consumer demand for niche books continues to be strong, b) the quality of indie published books has been or is being syndicated by the masses. 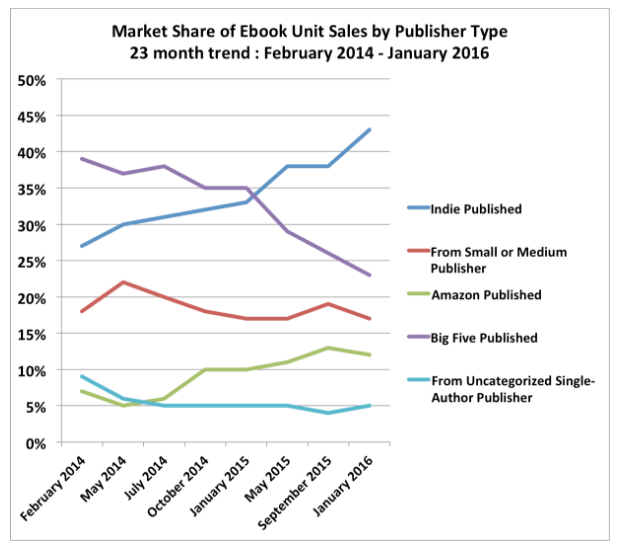 The Writing on the Wall

This shift in dynamics is going to accelerate as consumers earn more trust in authors selling to them directly. Authors already prefer to self-publish in-theory because they can earn substantially more. Selling directly through Amazon means pocketing 70% of the cover price. Selling through a publisher authors typically get 25% of their publisher’s net (for eBook sales). However, cutting out the middleman today still represents an opportunity cost to authors seeking shelf-space offline where 70% of book sales still happen, not to mention abandoning the prestige of making the NY Time Best Seller list.

Arguably many authors today will earn more by sticking to self-published eBooks, but making the NY Times Best Seller list as a self-published author is still unlikely as is getting a deal to produce a major motion picture based on your work. But the dynamics are changing and The Martian is timely example of this, having become both a best seller and a major motion picture.

The Martian was a self-published serial novel that just got traction. Its popularity online caught the attention of Crown Publishing (a division of Penguin Random House) and the rest is history. Success stories like The Martian will certainly inspire more writers to self-publish directly to their audience rather than submit to the complex and onerous demands of the publishing industry.

Better for Consumers and Authors, and Publishers?

Consumers win in this new paradigm of publishing. It means more choice from an increasingly wide range of authors and genres, at a lower cost. Authors win because as they build trust with consumers the more willing those consumers are to pay a few bucks to download their eBook. In fact, authors are set to gain tremendously from this new dynamic. Based on my own back-of-the-envelope estimates self-published authors are approaching $1 billion in revenue on Amazon.

Statista estimates eBook Sales totalled $6.74 Billion in 2015, of which Amazon controls 71% (according to some estimates) giving them $4.79 Billion in eBook Sales. Averaging the percentage of sales per category reported by Author Earnings from January 2015 through January 2016, Indie Published and Uncategorised Single-Author Publishers represent 24% of sales or $1.14 Billion. 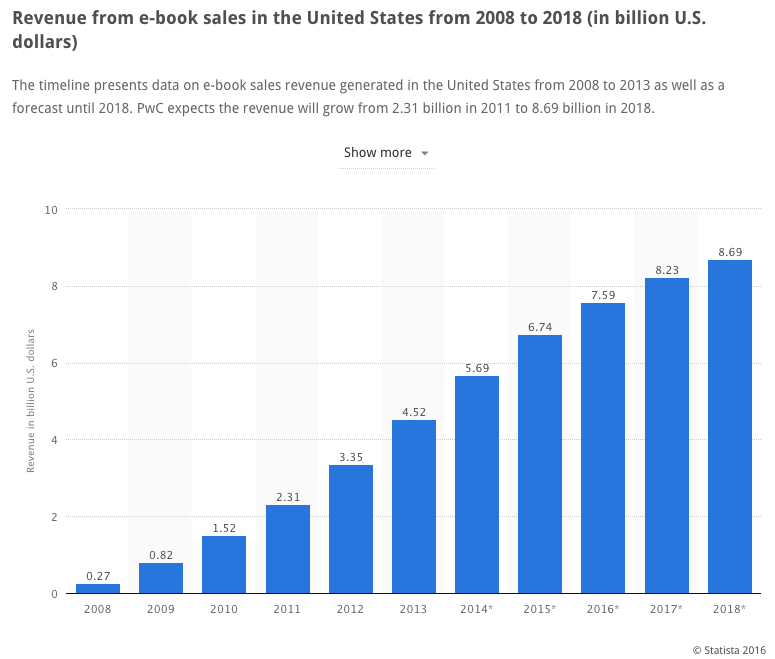 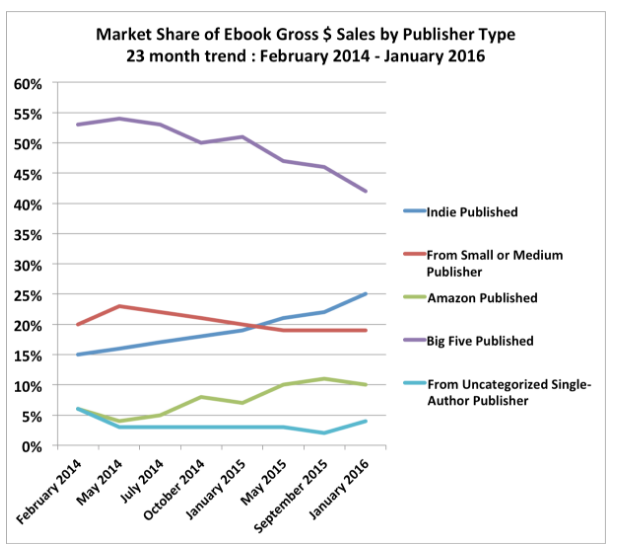 The question remains whether this will be good for publishers? Clearly it is a better model, allowing consumers to syndicate books first means a more democratic vetting process, less overhead, and higher chances a book will hit the best seller lists once it’s picked up. But that could be temporary, over time the publishers could simply become irrelevant.