While mPOS will drive significant disruption in 2015 for transaction processing, it is also enabling consumers to embrace mobile payments. That's because EMVco has designed EMV to work with NFC for contactless payments. The rise of Host Card Emulation (HCE), a term attributed to the founders of SimplyTapp, is also a driving force since it lowers the barrier for mobile payments by eliminating the need for hardware called a Secure Element (SE).

It’s all very exciting, and the bottom-line: mobile payments will become a force majeure among payment methods within a few years. Business Insider predicts US Mobile In-Store Payment volume will grow 172% for the next 5 years. Data compiled by Statista.com has breaking $700B by 2017.

First, I wrote about this last year in a post about digital wallets, when Apple Pay was still a blip on the buzz-radar. Digital Wallets really needed mobile payments to come-of-age, and now they are.

Mobile payments got a huge injection of consumer confidence from the release of Apple Pay. Anyone would assume Apple’s share of global mobile payment transactions will be significant, eventually. But remember, there are several very real competitors. Just a few years ago many predicted that PayPal would “win” the mobile payments market, now Apple Pay is all the rage. The reality is there probably will not be any clear winners, not for a while anyway.

Products like Softcard, MCX, Apple Pay, Google Wallet, and not to mention whatever Amazon is cooking-up, are all vying for transaction volume in 2015, with a tipping-point of relevancy approaching somewhere between now and 2017. Venture Capital, Credit Card Networks (Mastercard and Visa), Banks, OEMs, everyone seems to be making some bets on mobile payments.

Apple is driving US merchant demand for NFC, period. Other solutions existed for years, but in the US they never drew merchant adoption en masse. That's not the case everywhere, in fact NFC payments are so common in South Korea that literally everyone uses some form of stored-value payment card which is enabled by NFC. However, the unique position of the US means global adoption is now underway.

US merchant adoption was slow until Apple Pay. Business Insider reported that VeriFone, the largest provider of countertop-terminals in the US, has seen a spike in sales of NFC enabled devices since the launch of Apple Pay. That said, Apple Pay is unlikely to become the leader in mobile payments in spite of the important role it plays in growing the market.

And in fact Apple Pay is not garnering the kind of adoption many had hoped for. Some reports show 1% of transaction volume on mobile can be attributed to Apple Pay, not bad I guess but nothing to really brag about. One report also showed that less than 5% of iPhone owners who could enable Apple Pay had done so, and among them on 30% had used it. That said, Wholefoods (one of the most popular merchants for Apple Pay) claims they are witnessing “significant growth” in usage. So there is a ways to go for Apple yet, but integration of BLE and facial recognition software not to mention the Apple Watch will all drive further use of this payment method.

How do Google and Paypal feel about Apple Pay?

Paypal and eBay split just weeks after the launch of Apple Pay. It’s unclear that Apple had anything to do with that, but it is telling. Paypal was once considered the front-runner, now they are just one in a peloton where Apple appears to be slightly ahead.

Paypal has an advantage though, it’s really a payments company and builds at least some of the components driving the competition. Braintree, now part of Paypal, supports Apple Pay and enables it for merchants along with Paypal. Paypal has solid legs in mobile payments, announcing partnerships with Samsung, Microsoft, Blackberry (um, the third-leg?), and it works on every platform. Not to mention they own the coolest P2P payment app around, Venmo.

Google has stayed in the peloton on sheer force of will. Sources say they are running a substantial deficit with Google Wallet, desperately trying to get adoption. While Apple generates demand for NFC enabled terminals literally overnight, Google couldn’t pay merchants to enable NFC and accept Google Wallet for years. That's about to change.

Google Wallet represents 4% of mobile payments while Apple Pay is estimated at 1.7% (those numbers will probably increase rapidly in 2015 for both Google and Apple). Google Wallet is also available on iOS and supports TouchID.  Google could conceivably ride the Apple Pay wave to attract iPhone users, and there is some indication this has already begun to happen. Since the launch of Apple Pay, Google Wallet usages is up 50% by some accounts. I can see Google using the powerful brand and software ecosystem to subvert Apple Pay even on iPhones, perhaps by managing receipts and bills in Google Drive. Google is already flexing its software muscles with APIs for Objects and Instant Buy.

Well, ISIS is a household name but that’s not exactly what At&t had in mind.

Rebranded as Softcard and invigorated by Apple Pay, this digital wallet is signing deals with McDonald’s and Microsoft. While speaking at a conference the CEO of Softcard said he is excited about 2015 since “finally people know what my company does” thanks to Apple Pay. However, the road ahead is going to be filled with challenges for Softcard.

Apple Pay was the clear buzz winner in 2014, but MCX was a solid second. The Merchant Consumer Exchange (MCX) is a consortium of the largest retailers in the United States -- in some cases the world -- which has committed to launching its own mobile payment method in 2015. The total transaction volume for MCX members was estimated at $1 Trillion last year. MCX made headlines after Apple Pay was launched when some of the member retailers, including CVS, “unplugged” Apple Pay citing an exclusivity clause in their MCX membership agreement.

There were a slew of negative posts by Apple aficionados from well known tech news sites, but many of them exaggerated the situation. The reality is that MCX is in an excellent position because it is retailer owned, which means loyalty rewards can be built in. It also means retail members are incentivized to promote the payment method, because it is designed with consideration for what merchants consider most valuable: consumer data.

Starbucks continues to be the unlikely leader in mobile payments, to the tune of $1.5 Billion in transaction volume, or 15% of all transactions in the United States (6 million transactions per week). 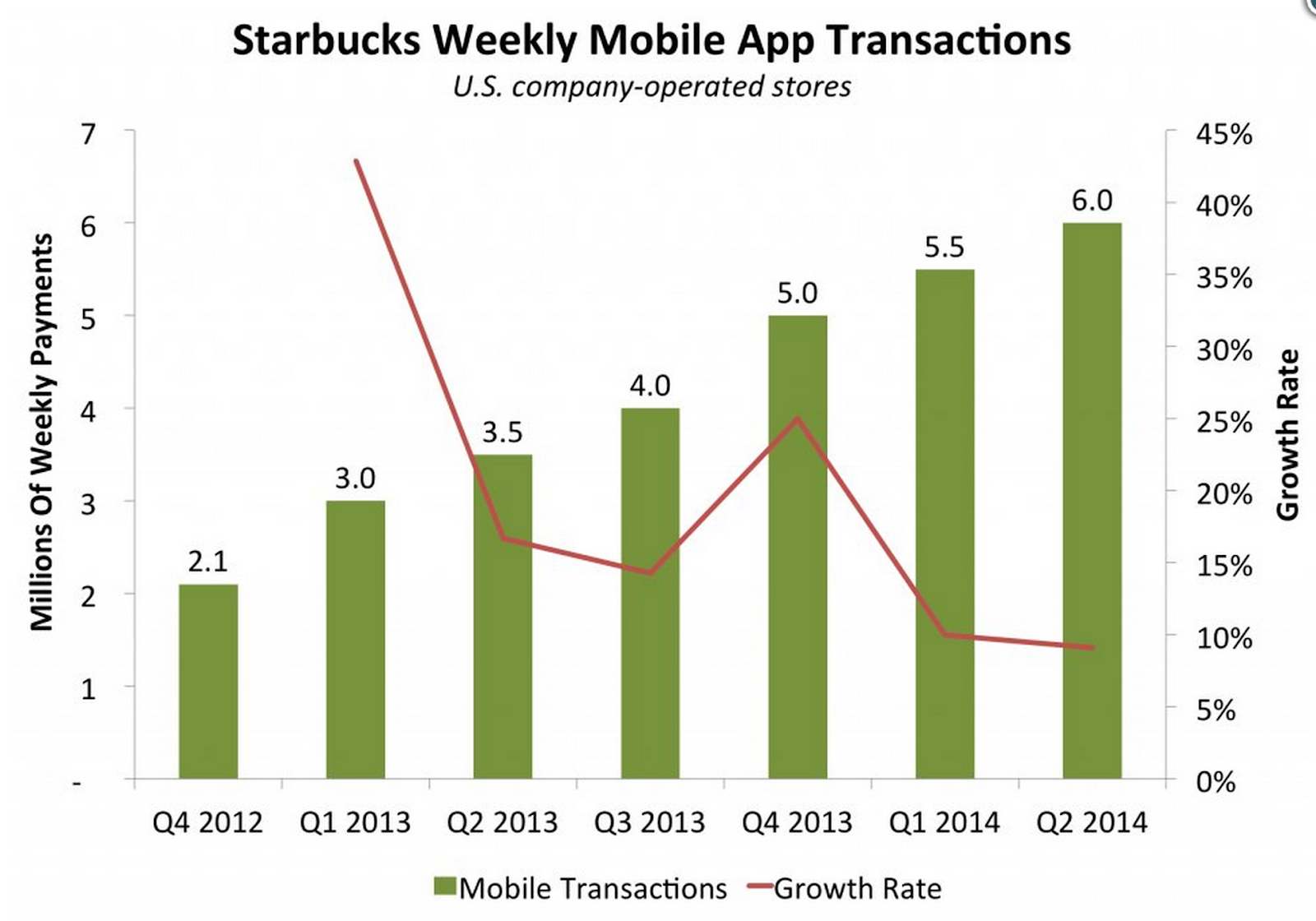 Starbucks mobile app has altered the course of mobile payments, proving that loyalty is a driving force for mobile adoption. By combining loyalty and digital stored-value Starbucks created a model which is the envy of many retailers and technology companies. According to Starbucks’ CEO, they are receiving numerous request to white-label their app for other QSRs.
Just how far ahead of Apple is Starbucks? According to Wired, each of the 1 million Apple Pay users who registered in the first few days of the launch would have to buy a cup of coffee every day to match Starbucks weekly transaction volume. 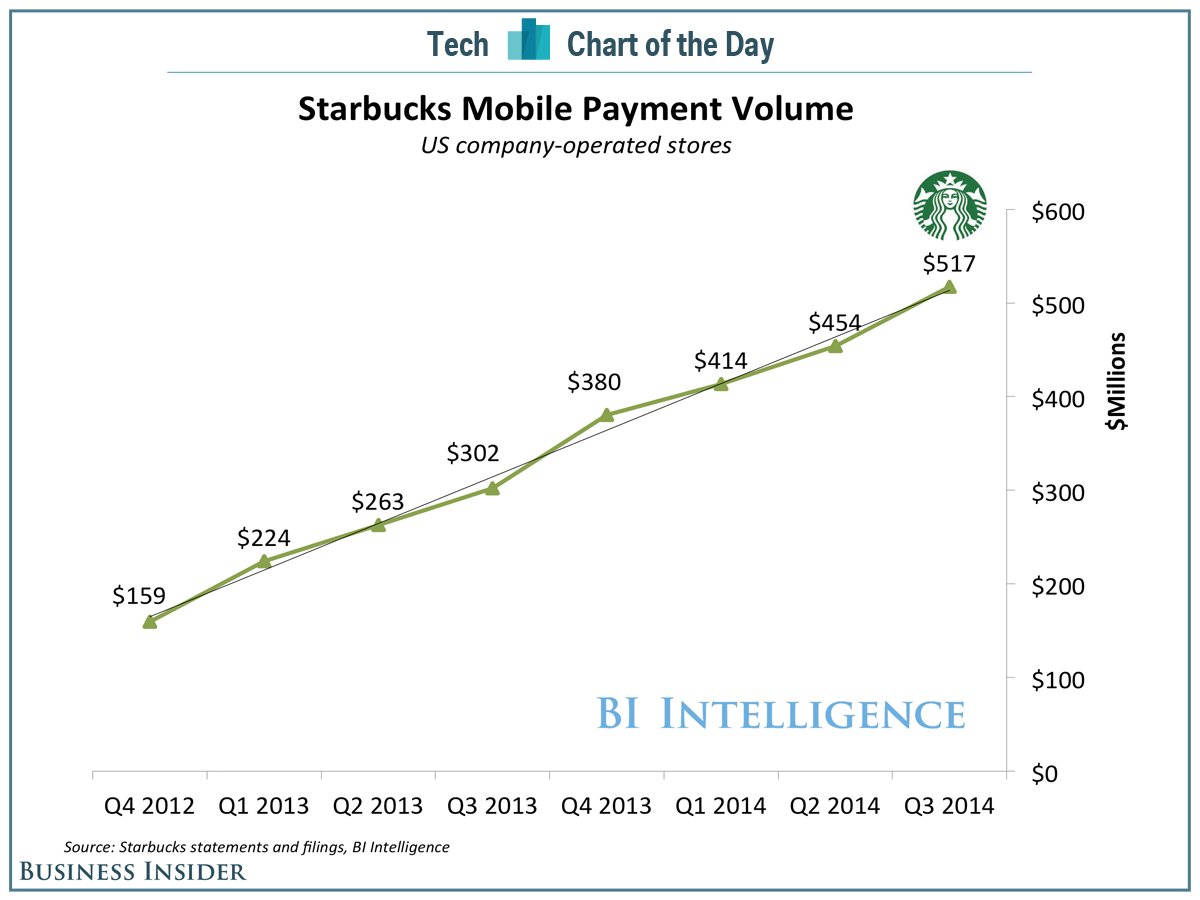 Mobile Payments will take over… in time

The sheer number of viable mobile payment methods means that for the next few years we won’t see a clear mobile payments champion. In addition to those I’ve briefly covered here there are several well-known startups including Square, Clinkle, and Coin. Some are apps, and some are programmable cards. Samsung is yet to respond to Apple Pay, but it is coming. Several friends at Samsung have been working on this since mid-2014, so it won't be long before Sammy's massive market share further accelerates mobile payment adoption.

Though it is unclear who operate the dominant mobile payment method, consumers will continue to use more than one for the next few years.