Disclaimer! SK planet is an investor in Frankly Inc. but this is in no way a “native advertisement” nor is it an official position of Frankly, SK planet, or any other business partner. No one asked me to write this, I just really like the app and want to write about it. Also I may be biased… but seriously Frankly is still awesome and you should download it right now anyway → iOS   Android

Since reading No Place To Hide, a great book about Edward Snowden and many of his revelations, I started to feel less comfortable with how Google, Facebook, or (since I live in Korea) Kakao, and most social media companies were storing my data. Naturally, a lot of people felt that way making anonymity the new black according to Digiday.

Around that same time SK planet invested in Frankly. Since I work at SK planet I’ve had the opportunity to have several great conversations with the amazing people at Frankly, and I know for sure that privacy is top-of-mind and that none of their users messages are stored. They set out to liberate social networking with a secure, snoop-proof messenger platform, period.

The idea behind Frankly was that people should have a platform where they can chat frankly with each other without concerns that their conversations are being recorded. Bottom line philosophy at Frankly: our conversations on messengers should be at least as secure as conversations IRL (“in-real-life”).

Frankly gives you total control of your conversations and promises they are ephemeral so you can chat freely. Not too mention that you will have a fun and compelling experience too.  To accomplish that they have built a first class team that shares this philosophy, raised more than $20 million, and recently IPO’d in Toronto. Frankly has the runway to make their vision of a liberated social networking experience as reality.

It can be tough to adopt a new messenger, but by making the experience compelling and totally secure Frankly has empowered early-adopters to stick it out and get their friends on the app. First, your messages will disappear forever after a few seconds. The the app also looks awesome, plus it’s really easy to customize the way your chats look and feel. You can also “pin” your messages so if you want to remember some important info or context that’s totally possible (which I think is a really neat feature), and remove sent messages you didn't mean to send or rather you hadn't sent. Of course you can also share photos, and they will evaporate as well.

Frankly is probably the best application for group chats. When you enter a group chat on Frankly, your messages are anonymous. This is the most liberating aspect of Frankly, and it makes it a great tool for candid conversation among friends and co-workers, or between brands and customers. 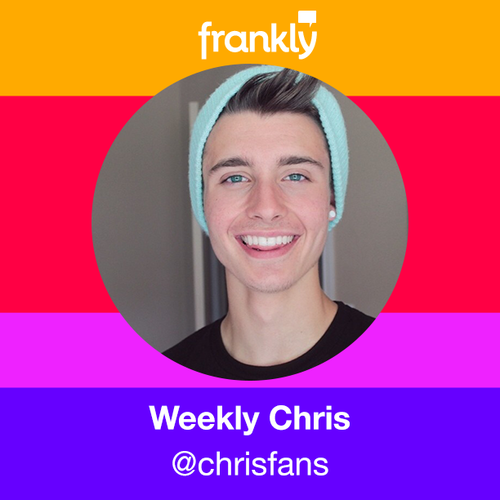 Savvy Partnerships To Realize The Vision

Getting user adoption for any app is hard, and for messengers it is really hard. In addition to its own messenger app, Frankly means to achieve their vision of liberating the chatting masses through partnerships. Their SDK is available for any business that shares their philosophy and wants an easy implementation of secure, private, anonymous messenger for their customers.

Last year Victoria’s Secret integrated Frankly’s SDK into their Pink shopping app. The app made it possible for customers, who might be concerned about their privacy whilst chatting-up and sharing photos of lingerie, to engage with the brand with texts, customizable emojis, user photos, and multiple shades of pink.

Models were even available for live chat!

I really love this app, for being awesome and for executing a strategy that is aligned with their core-values. It’s too bad because more people I know aren’t on it yet, but hopefully that will change in 2015. If you’re a business who cares about your customers, get the Frankly SDK. It's a particularly good idea for retailers who want to integrate social networking into their omnichannel strategy, because they can reassure your customers the channel is secure.

Best of luck to the team, thanks for looking out for all of us, and congrats on the IPO!