The Future Of The Cloud? The Crowd.

Iran isn't the only one launching monkeys to space these days. Launch Festival 2012 winner of best startup, Space Monkey, finally launched last month on Kickstarter. Boy I’m so excited and so should you!

What Clouds Are You On?

For most people, the cloud is an amorphous thing that exists somewhere online. In reality, the cloud services consumers use (i.e. Dropbox, iCloud, etc) are supported by massive data centers and enterprise software built and operated by Amazon, IBM, Facebook, Apple, Microsoft, Google, and a host of companies you've probably never heard of. New players are entering the Big Data fray too, such as VMWare, whose data centers are scheduled to go live next month in a few US states (more locations coming soon).


While most people have at least heard of Dropbox, the Big Data vendors are where the real monkey is. An open source professional community called Wikibon published a list of Big Data vendors, along with their revenues which exceeded $11B in 2012. Gigaom reported that IDC  forecasts Big Data revenue will reach upwards of $70B... or $20B by 2017 -- um, yeah they’re not sure, it's “like herding cats."


Anyway, according to the Wikibon community, these companies should have a 31% compound growth rate for the period of 2012 - 2017. Holy Cow! Indeed, we are all moving to the cloud. What’s next, outer space? Sort of.

Most cloud services are built on these massive Big Data vendors, and the migration to cloud based computing means these vendors are building new data centers in rural (supposed secure) locations in the rural United States and elsewhere everyday. However, two guys set out to change the way we do we use the cloud.


And boy did they pick a cool name: Space Monkey.


Space Monkey has a different vision for the cloud, and it starts with you. When you subscribe to the service you get a 2TB storage device. This device (which looks really awesome - btw) is connected to all the other Space Monkeys in the world, each sharing 1TB or 50% of the storage space available to distribute the data across the Space Monkey network.


Sounds like it would be hard to do right? Well, the device itself is apparently not that complicated... but the founders are geniuses so no kidding! The really amazing part of this company is not just the technology though, it is they are really building a distributed storage network with real users. While Dropbox and other cloud services are forking out cash to rent space at Amazon’s (et al) data centers, Space Monkey is building a crowd-based data center where each user is contributing to the total capacity and efficiency of the service.


Ten Times Better. They don’t have to lease from Big Data vendors so Space Monkey can offer x10 more storage for a fraction of the price. Don’t believe me?


1TB of storage on Google Drive will run you $50 per month. Dropbox... forget about it. When you sign-up for Space Monkey, you get a 1TB for $10 per month... $120 per year. Plus you get this really rad looking device to show-off to your friends. The user experience is way better too, since you can store everything virtually without taking up precious space on your local disk. Basically you can afford to have enough storage where backing up and storing files you can access from anywhere is a totally pain-free experience.


Interestingly, all the hype around Space Monkey has overshadowed a very similar product.


Symform also offers a new type of cloud that also leverages distributed data storage in a similar way to Space Monkey (or kind of like torrents actually). Symform allows you to use your local hard drive to contribute to the cloud community, and offers a really unique pricing scheme. 10GB is free, and you get 1GB for every 2GB you donate. Cool! 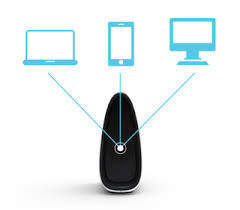 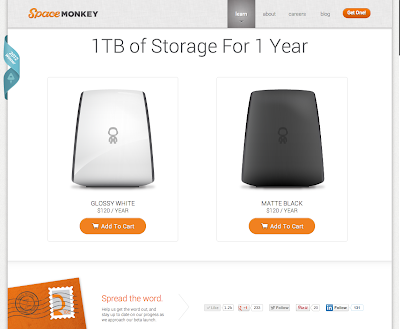