If you’re old enough, you remember having a “little black book” where you kept all your contact information on the go. For real pros, this was a necessary supplement to a rolodex. However, since the 90s “the little black book” has been transforming from an invaluable papermate to perhaps the most vital piece of software we carry. So far in 2013 the phonebook app, or contacts app (whichever you prefer), has been a hit. Here are a few I’ve taken a look at for iOS.

Xobni provides professionals with a first-class contact management system that can be accessed from Gmail, Android, Outlook, and iPhone. Of course, it will cost you. Last time I checked it was on sale from $10 to $7.99 per month, or $47.95 per year. The pro service offers up some neat tricks for business people who are still (sadly, I am one of them) married to Outlook. My favorite is having access to Gmail, Android, or iPhone contacts from my Outlook... sweet.

For less serious folks you can get Smartr Contacts by Xobni, available for iOS and Android. Like Hacker reported on the app way back in 2011 when it was released for Android, and again in early 2012 when it was released for iOS. Smartr is pretty cool, showing you statistics like how often you appear in messages with your contacts (syncing with iCloud, iCal, Yahoo, Gmail Facebook, Twitter, and if you have a pro account Outlook).

Addappt is new and is now available without an invite code for iOS. It has a more social personality than most contact apps, claiming to be an “up-to-date address book maintained by your friends.”

Of course, up-to-date contacts will probably mean my friends have to be using the app as well. Clearly that represents a problem for Addappt. Last year I worked briefly on an app for Android called Vell, which not only promised to keep contacts up-to-date but also provided personalized video caller-rings. Based on that experience I am certain that critical-mass will be the most important challenge for Addappt, which is probably why they were “invite only” early on.

What a beautifully designed app, for those who like the minimalist approach. It is like Any-do for contacts, and I would love to buy it. However, the App Store reviews aren’t plentiful enough to have an average, so you may want to wait for a price-drop promotion (there is probably one on the way).

Thread offers the features you would expect including Facebook and Twitter integration as well as groups. It also offers a dialer, which is cool, but not really a big deal. The big win here is the design, it looks great.

If you think of your iPhone as an extension of your personality (you might as well) and that personality loves design, this app may be just what you are looking for.

I really like this app, though Smartr is probably better (especially if you go pro). It accomplishes most of what Smartr can do, syncs with the essentials (Facebook, Twitter, Linkedin), and has a nice profile page that let’s you email a “Livecard” to your contacts. Oh yeah, and it “keeps your contacts up-to-date” too, so long as you’re friends on CoBook. Another really cool feature is the ability to tag your contacts, and the dialer is really great as it displays recent contacts’ image above the dial pad (yup, you can click them to rapid dial).

CoBook has done a really good job of making a social utility, offering a nice blend of the social UX with the practical simplicity of a utility. The Verge wrote of Cobook, it is a “revolutionary step forward for contact apps.” I have to agree, it’s pretty awesome. 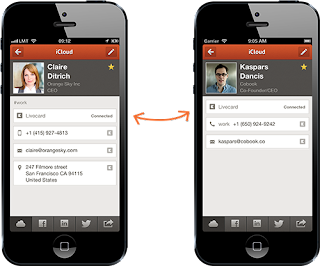 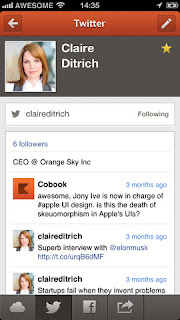 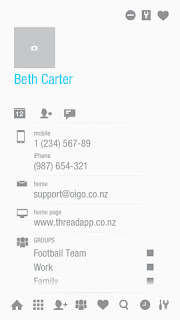 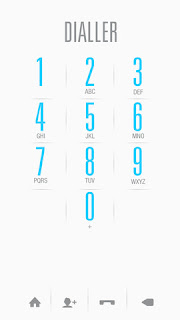 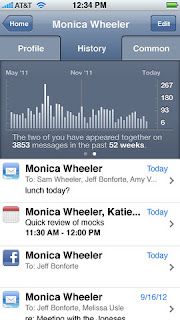 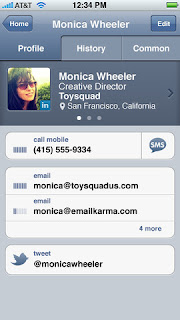